I originally wanted to title this post, “Estimation180: Don’t You Love It MADly,” but I thought the Doors pun would be too much to handle.

After my classes had a grasp of Mean Absolute Deviation (MAD) from the activities earlier this week, I began today’s class hoping to slide into a review of sorts for our statistics unit.

The bellwork for today happened to be the following task from Estimation180:

How much will the gray dumbbell weigh? 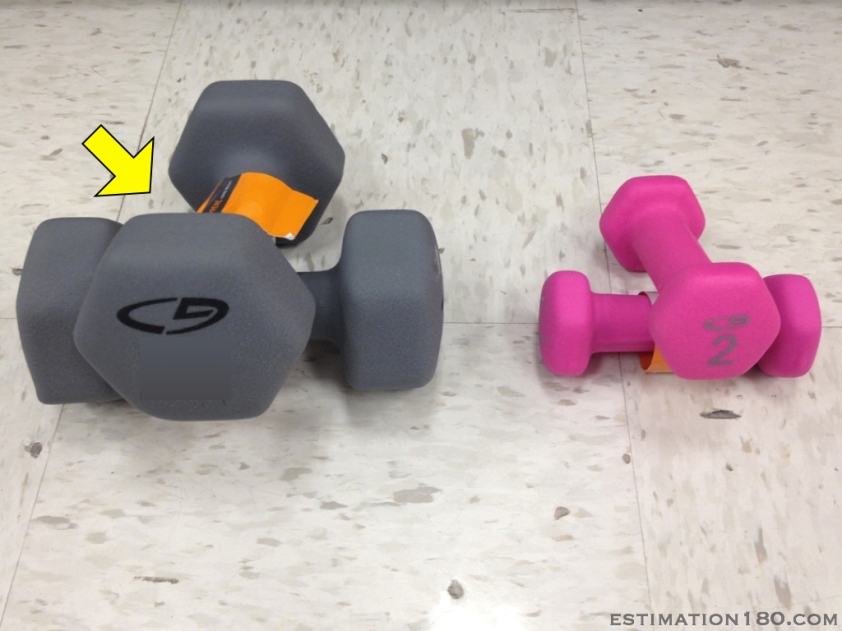 My students have been completing estimates 2-3 times each week this year, so the task was not out of the ordinary.  Furthermore, we already completed the previous 3 days in the series of estimate tasks.  I knew many students would be spot on (or really close) to the answer.

My original plan was for students to just make find quartiles and make a box plot for the estimate data (an idea I got from the teacher next door to me, who was modifying the human box plot idea I told him about during plan last week).  As I walked up to the board, I suddenly decided to start with MAD instead.  It was a ripe context for actually getting students to see what Mean Absolute Deviation is telling them about the data.

I asked students to find the mean estimate for the data (about 11.2 pounds). I asked if the mean seemed like an okay representative for the data or if it was skewed.  Students pointed out that 20 was skewing the data a little, but it wasn’t drastic (like if we went with the 2000 pounds a students jokingly wrote as his original estimate).  Then, I asked students to calculate the Mean Absolute Deviation for the data (about 2.6 pounds).  I related to students that the MAD was telling us that most of the estimates were no further than 2.6 pounds away from 11.2 pounds.

Students seemed to comprehend what I was getting at with this MAD business, so I revealed the answer to the estimate and we moved onto other activities.

Later in the period, I took a moment to calculate the Mean Absolute Deviation of the estimates from the answer to use as a closing talk.  Surprisingly, the MAD from the answer (about 2.1 pounds) wasn’t that smaller than the MAD from the mean of our estimates (2.6 pounds).  Actually, the cool part was the MAD revealed most students were pretty accurate. I shared this information with the class, then I paused as a great realization formed in my mind.  The next sentences I spoke were why I felt like this activity was so worthwhile: Imagine what our MAD would have been for our very first estimate of the year… (long pause) … It would have been huge. Today, we’re down to 2.1 for our MAD. That’s pretty small! Chances are, we even had a couple days during fourth quarter where our MAD was really close to 0!  It’s pretty awesome think how far we come in our estimate skills as a whole class this year and today we had a statistical way to measure it!

It was a moment of genuine inspiration and joy when I was teaching today.  I’m proud of my students on so many levels because of the work they’ve done this year, but it was an incredible moment to have a way to show students their growth from the start of the year using a current concept.